Eighty-eight years ago, a small group of civilians and military proclaimed the end of the absolute monarchy in Thailand, then-Siam. The group, named Khana Ratsadon (People’s Party), promulgated the first constitutional state and introduced democracy to the kingdom, thus inaugurating a major chapter in the country’s political history.

Nearly nine turbulent decades later, Thailand seems to remain dazed by that fateful event. It is barely mentioned in school textbooks, and Thais who learn of it still debate to this day whether the revolution was a sound decision. Political instability and nineteen coup d’etat define most of its precipitates, consequently obscuring the original intention.

Along Ratchadamnoen, the road where democracy first sowed, there are regrettably not many spots to remember. On the occasion of the original Thai National Day, Plus Seven combed through historical photos of the event and revisited the real locations of the bloodless transition.

Then: In the early morning of 24 June 1932, having been told there was an uprising, military troops assembled in front of the Ananta Samakhom Throne Hall. A confused crowd gathered to see the equally perplexed soldiers awaiting orders. Phraya Phahol Pholpayuhasena, one of the soldier conspirators, climbed onto a tank and read the Khana Ratsadon (People’s Party) Manifesto.

Now: The Royal Plaza and its surrounding area are undergoing certain transformations. Certain spots previously open to the public, including the Dusit Zoo and the Ananta Samakhom Throne Hall, are now permanently closed. Visitors are only allowed to sightsee from afar.

Then: In 1936, the People’s Party held an embedding ceremony of a bronze plaque. The plaque was put on a ground near the Equestrian statue of King Rama V, where Phraya Phahol Pholpayuhasena read the Manifesto that established a new constitutional regime. The inscription read, “Here, at dawn on 24 June 1932, the People’s Party has brought forth a constitution for the glory of the nation.”

Now: The plaque mysteriously disappeared in 2017. In its place is a new plaque that reads, “May Siam prosper forever [with] happy fresh-faced citizens to be the force of the nation.” and around the rim “Respect and loyalty to the Buddhist Triple Gems, to one’s family clan, and being honest towards one’s King are tools for making the state prosper.”

Then: Officially finished on 24 June 1940, the Democracy Monument commemorates the transition from absolute monarchy to constitutional monarchy. It also serves as the Kilometre Zero of the national highway network.

Its elements symbolises the aspects of the revolution: the 24-metre tall wings and 24-metre long radius represent the date, the 3-metre tall central turret represents June (third month of traditional calendar), and the 75 cannons around the outer ring represent the year 2475 BE (1932 CE). The relief sculptures at the base tell the story of the People’s Party in carrying out the revolution.

Throughout the course of Thai political history, this monument has become a rallying point for various civil protests. The most notable demonstration was the student-led uprising in October 1973. It pinpointed university students’ influence in politics and sealed the monument’s symbolic function.

Now: Since the 2014 coup d’etat, bypassers and political activists usually find the monument enclosed with fences, or surrounded by decorative flowers, deterring people from entering. It now principally serves as a roundabout on Ratchadamnoen Avenue.

Then: On 10 December 1932, a procession carried the constitution charter from the Grand Palace to Ananta Samakhom Throne Hall, where King Prajadhipok (Rama VII) granted the first permanent constitution of Siam. It was a result of a tug of war between the People’s Party and the Palace, in which the monarchy ended up regaining many powers it had lost in the previous People’s Party’s charter.

The Grand Palace and Wat Phra Kaew symbolise the revered institutions–the monarchy and Buddhism–that commoners perceive as from up above. The granting ceremony, and the inclusion of these prominent landmarks, helped construct the narrative that it was the king, not the People’s Party, who graciously gave the Siamese people sovereign power and the constitution.

Now: Apart from being a mandatory attraction to tourists, Wat Phra Kaew and the Grand Palace still serve as a principal venue for royal ceremonies, such as the coronation of King Maha Vajiralongkorn (Rama X) in 2019.

Translation of the Revolution plaque and the “fresh-faced” plaque https://prachatai.com/english/node/7072

The design of the constitution granting ceremony (in Thai)
https://www.silpa-mag.com/this-day-in-history/article_4732 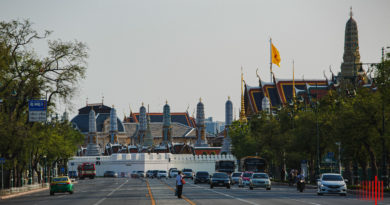 Rattanakosin Island: Human Life in the City of Angels 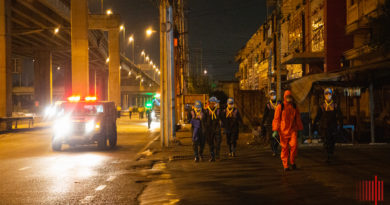 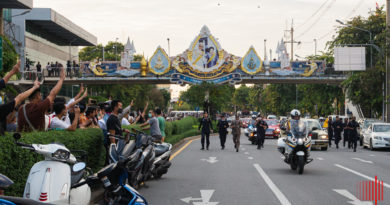